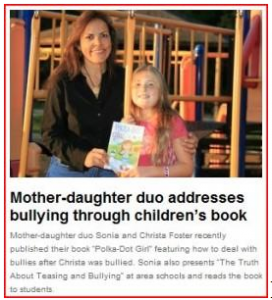 He called her a polka-dot girl because of her freckles, which was very upsetting for Christa Foster.

As soon as she got home from school that day, Christa started to write about her feelings about being bullied.

The Jack Fields Elementary student turned that passion with the help of her mom, Sonia C. Foster, into a best-selling book by the same name she was called, “Polka-Dot Girl,” which shares the story of finding inner power and strength and how to overcome bullies.

“When Christa arrived home from school, she was upset. I asked her if she wanted to write as a way to feel better and she jumped at the idea. It was her idea to illustrate the book,” Sonia said.

The publishers even included several of Christa’s own drawings in the book and others helped the illustrators to draw the details of the story.

Writing is a passion mother and daughter share since Sonia has already written several books and has wanted to be a writer since she was a young girl.

Working on “Polka-Dot Girl” together changed Christa’s attitude toward how to deal with bullies and helped her to become more extroverted.

In the book, the situation is resolved without the help of the parents or the school officials which is a favorite part of the book for students who have already read the book.

“Writing the book was a lot of fun. In the end, the boy just wanted to be my friend,” Christa said.

To further spread the anti-bullying message and share the book with others, Sonia presents “The Truth About Teasing and Bullying” presentations at schools around the area.

She has presented numerous times at Jack Fields Elementary as well as several other schools around the area and she hopes to share the book with more students in the community and Humble Independent School District.

“I completed a lot of research with the book and wanted to learn more. After all that I learned, I knew I wanted to share the message with other students; it is a way to empower them,” Sonia said.

“It is really exciting to have my own book; my friends thought it was pretty cool,” Christa said.

Sonia added, “The book was something we could do together which is important.”

Sonia Clark Foster is available for presentations at any schools or groups. She can be reached at SoniaClarkFoster@gmail.com.

For more information about “Polka-Dot Girl,” log on to www.soniaclarkfoster.com.